Views from the Sieve

The Independent Dagenham and Redbridge forum

Just been on the Chorley website and read their small match preview. One thing that stood out was the part they have for Admission (as follows)

***Please note, Dagenham & Redbridge FC has the right allocate the West Stand to away fans if there is an away following of more than 600 or the safety officer deems it necessary to have segregation.


Am I mistaken or wasn't the rule changed so that we HAD to offer away teams the option of Terrace tickets? If so, perhaps a number of Chorley (and other away fans) are being put off of coming as a result of the prices listed on their website.
Top

From what i have seen the option for away fans to stand in the sieve has not been place in any games this season.
Top

I did think it had been quiet at the end of the Sieve. Im led to believe that actually the rule of having to offer away fans a terrace ticket was scrapped at the start of this season.

I don't care which club it is, but £21 for National League football is nothing short of scandalous! 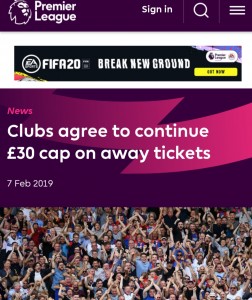 You’d think away fans would just come in the home turnstiles at those prices. If they kept quiet and mingled in I’m sure it’d be quite easy.
Be alert, the world needs more lerts!
Top
Post Reply
4 posts • Page 1 of 1

Return to “Discuss all things Dagenham and Redbridge”